Sit. Stay.
Let me tell
you a story. 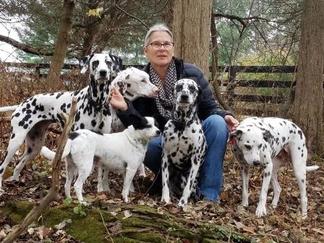 The Original Dally Gals
In 2008 a three month old puppy was struck by a truck and left in the road to die.  A good Samaritan picked her up and brought her to a nearby Veterinary Clinic.  The owner was located and opted for euthanasia, which he was not willing to pay for.  The clinic contacted a local rescue and asked if they could help.  They said they would, and chose to save her life.
Hearing about this little fighter through a fundraiser, my husband recognized that familiar look in my eyes, and I drove to get her. She had weeks to go with the process that we hoped would save her most injured leg.  She was a fighter in her hot pink cast, and it was love at first sight.  We named her Zuri.
Taking responsibility for an abused or injured animal is both fulfilling and tiring all in one.  Trying to find this little puppy some comfort during this process was my mission.  The weight and size of her casts made it impossible for her to curl up or get in and out of a regular bed, or support her little chin so that she could see what our other pups were doing while she came out of anesthesia or prepared to go back in.  The clinic used rolled up towels to support her.  It worked in the clinic, but there had to be a better way.
Let’s fast forward to the creation of the Daily Dally Pet Pillow.  The Dally gave Zuri support for her head and back, allowed her to place her casted leg over or under it, and use it like a body pillow supporting her tiny hips.  Having no bottom allowed me to place it wherever Zuri wanted to rest; the back seat of the car on rides back and forth from the clinic, on my bed with me at night so I could keep an eye on her, and on the carpet when she wanted to be part of the action.  No connected bottom also meant no crevice for dirt, dander, or dust to build up and contaminate her wounds.  I also opted for practicality and made it machine washable and super durable.  It worked!  In fact it worked so well that my other pups and my cat started using it.  They all got their own.  In fact friends, relatives, and other rescue people started asking if they could have one.  And so, my little idea started to take on a life of its’ own.
I haven’t stopped rescuing, adding four more to the family since Zuri, and I haven’t stopped supporting as many rescues as I can with financial donations,  Dallys, and providing transport and foster help when ever I can.  I realize I can’t save them all, but it is my dream to help save as many as I possibly can with the proceeds of my little sole proprietorship business.
This story does have a happy ending, Zuri retained all four legs and though missing some parts in one, she has learned to adapt.  Zuri runs freely with her sisters -  Tierra; a Dalmatian with Addison's Disease, Bella; a blind Dalmatian, and Dolce a deaf Dalmatian on 17 beautiful acres in Leesburg,  Virginia.

2017 Update:  This year saw the beginning of a love story with a Rat Terrier mix named Leesy Loo that had suffered some abuse and been bred over and over.  Of course she had to join our pack.

2018 Update: This year began with the foster/adoption of Hannabelle, a spunky gal captured as a young pup in a forest in NC.  She was my first feral pup and when we finally broke through we couldn't let her go.  This year also saw the temporary addition of Mr. Raleigh, an overweight aggressive Dalmatian in need of  a TPLO surgical foster.

2019 Update:  This year we lost the Captain of our ship - Tierra.  On Mother's Day 2019 she passed quietly in my arms, and lives forever in my heart.
2019  Update:  Miracles do happen- we celebrated the amazing adoption of a brand new Mr. Raleigh, slimmed down, his knee repaired and no longer aggressive he lives his best life in VA beach.
2019 Update:  In May, just before Tierra's passing we added a foster, Chloe CoCo Chanel, a survivor of severe hoarding and abuse in Hampstead MD.    Chloe was a tough go at first; she has worked hard at her rehabilitation and earned her place with the pack.

2020 Update: What?  Another Dalmatian... Valentine's Day brought us Arley Rae, a beautiful deaf Dalmatian puppy.  Arley is the angel we have been praying for.  Chloe's progress has been accelerated by Arley Rae.   Chloe is experiencing the puppy stage she never had the chance to while growing up in the house of horrors.   Arley and Chloe are always together.  It is as if they were from the same litter.
Rescue is like a box of chocolates, you never know what you are gonna get but, most times its just what you need.
The Daily Dally Pet Pillow is currently being offered to VIP Pets at:
​Landsdowne Resort and Spa, Leesburg, Virginia and The Embassy Row Hotel in Washington, DC